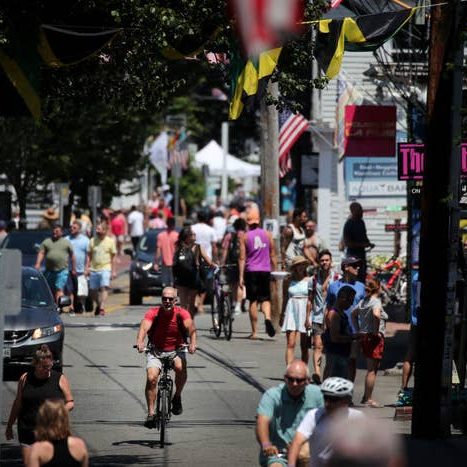 The CDC’s about-face recommendation this week that vaccinated people in high-risk areas should resume wearing masks in indoor public spaces was spurred by new data that showed that even vaccinated people infected with the Delta variant can spread it, the agency said Friday. The data analyzed a large outbreak of COVID-19 cases among vaccinated beachgoers in Cape Cod, Massachusetts, over the July 4th holiday.

The outbreak overwhelmingly led to mild cases of COVID-19 among vaccinated people, demonstrating that the vaccines were still doing their main jobs of preventing severe disease and death, even against the highly contagious Delta variant.

Until now, the vaccines have also largely prevented fully vaccinated people from transmitting the virus to others. But the new findings released by the CDC found that vaccinated individuals who get infected with the Delta strain of the coronavirus — so-called breakthrough infections — can carry high levels of the virus that might make them as contagious as people who have not been vaccinated.

It’s unclear exactly how often breakthrough infections occur, but they are thought to be relatively rare. Still, the new findings suggest that even vaccinated people in areas with high levels of infections should take more precautions.

“This finding is concerning and was a pivotal discovery leading to CDC’s updated mask recommendation,” CDC Director Rochelle Walensky said in a statement released on Friday. “The masking recommendation was updated to ensure the vaccinated public would not unknowingly transmit virus to others, including their unvaccinated or immunocompromised loved ones.”

Outside experts reached by BuzzFeed News largely supported the CDC’s decision based on the new data, arguing that the findings only add more urgency to speed up the nation’s lagging vaccination campaign. But some also raised questions about how much could be concluded from the Cape Cod outbreak alone.

“The long-term outlook is that it will be very difficult to avoid getting infected by Delta or even more transmissible future variants if you are unvaccinated,” said University of Arizona immunologist Deepta Bhattacharya, by email. “At some point, you are very likely to get infected if you aren’t vaccinated.”

On Tuesday, the CDC recommended that in places with moderate to high transmission, all people — both vaccinated and unvaccinated — should wear masks in indoor public places. It was a partial reversal of its guidance from May, when the agency said that vaccinated people no longer needed to wear masks in most settings. In explaining the decision, Walensky cited new findings on breakthrough infections but did not share any new data supporting the decision, spurring confusion and frustration.

That data, released Friday, came from a stretch of events and large gatherings held around the 4th of July — held both indoors and outdoors — in a town that news reports have identified as Provincetown, in Barnstable County, Massachusetts. Out-of-towners and residents reported attending densely packed parties in bars, restaurants, guest houses, and rental homes. By July 26, about 450 Massachusetts residents had tested positive. Troublingly, three out of four of the Massachusetts residents in the cluster were fully vaccinated, most infected by the Delta variant.

An analysis of the outbreak led by the Massachusetts Department of Health and the CDC showed that the amount of virus in fully vaccinated patients was similar to those who were unvaccinated, not fully vaccinated, or did not have a known vaccination status. That suggested that the vaccinated individuals with COVID-19 were also able to infect others.

George Rutherford, an epidemiologist at UC San Francisco, said that the data appeared to be a “tipping point” forcing the CDC to change its masking advice.

Delta is now the dominant strain of the virus circulating in the US. According to a recent study, the amount of virus present in the body of a person infected with the Delta variant is a thousand times higher than with the original strain of the coronavirus. The variant is as contagious as chickenpox and may cause more severe disease than previous strains of the virus, according to internal CDC documents first reported by the Washington Post. The document urged health officials to acknowledge that “the war has changed.”

It’s not surprising that the virus has evolved to become more transmissible, given that it’s been able to spread rapidly worldwide in areas with lower vaccination rates, experts said. “We had expected that continued circulation of SARS-CoV-2 would lead to additional mutations,” said Yvonne Maldonado, an infectious diseases and global health professor at Stanford University, by email. “In this case it appears the mutations in the Delta variant allow it to replicate almost unchecked even among vaccinated individuals.”

But some scientists are skeptical that the new CDC results can be interpreted very broadly. Bhattacharya called it “immunologically unlikely” that breakthrough cases were as contagious as infections in unvaccinated people. “It is hard to imagine a scenario where vaccines would work as well as they do without reducing viral loads and/or the duration of infectiousness,” he said by email.

“Equating viral loads with infectiousness is very complicated, especially when comparing vaccinated and unvaccinated people,” Bhattacharya added. “This has a very high likelihood of being wrong and is the kind of unnecessary statement that has come back to haunt public health guidance over and over throughout the pandemic,” he said, citing preliminary data from Israel finding the vaccinated are less likely to infect others overall.

The CDC also caveated its findings, noting that measures of how much virus people had came solely from their genetic tests for the virus, not precise lab counts of viral particles.

Still, Bhattacharya added, “I think it is reasonable to warn people that vaccinated individuals are at greater risk of breakthrough infections and transmitting to others with delta than with previous variants.”

In Cape Cod, the reported symptoms that showed up among the breakthrough cases were mild: cough, headache, sore throat, muscle pain, fever. That’s a very promising sign that the vaccines are still doing their jobs reducing severe cases and deaths. Pfizer and Moderna’s shots have been shown to be 96% effective against hospitalizations and death with the Delta variant.

“Unvaccinated people are now entering a period where they have a sky-high risk of getting infected if they live and work in areas where the variant is circulating,” Rutherford said.

The findings also raise questions about whether or not booster shots will be helpful in the fight against Delta and other future variants. „This information alone does not make a booster more needed at this time, unless it was demonstrated that vaccinated individuals are losing immunity,” Maldonado said. “So far that is not clear, but it may likely be demonstrated in the coming weeks or months.”

On Thursday, House minority leader Rep. Kevin McCarthy of California and other Republican lawmakers skeptical of the new mask guidance expressed doubt about the evidence for the change, claiming it was driven by a study in India among people vaccinated with less effective shots. McCarthy’s office did not respond to a query from BuzzFeed News on the newly released CDC data.